In fact, I will go as far as saying that, so far, Edinburgh is the highlight of my Wicked Campers road trip and one of the best cities of my 2012 European travel adventure.

After three days and nights of exploring this enchanting city, here are eight experiences that I think are essential for an Edinburgh adventure.

1. Listening to local folk music at The Royal Oak

There is nothing like a local musical encounter to make you feel like you’ve met the real face of a place. After a night in The Royal Oak, a small community pub filled with folk music, I felt like I’d seen inside a secret Scottish society.

Arriving a little too eagerly at 9pm on the dot, Dave and I wandered into the downstairs ‘lounge’, bought a pint from the rainbow-haired bartender and slid into a booth. At about 9.20pm the first musician arrived and played a few diddies on his guitar. Within the hour, six or seven musicians had squished into a booth, with accordions, fiddles, drums and woodwinds, and were creating some of the most wholesome folk I’d ever heard.

That was until I wandered upstairs to the ‘public’ bar, where 20 pint-nursing people were transfixed by Bill and his band.  We spent the next couple of hours being wooed by songs of Scotland’s past, songs of love, and even a tribute song about the Australian ANZACS. (Thanks Bill). A truly special evening with genuinely lovely people.

2. Having a pint and stovies at the Halfway House

Tucked down a narrow stepped alley, just off the High Street tourist trail, this tiny pub was a delightful find.  Complete with politic-debating Scotsmen, mid-pub crawl work mates and a couple of tradesmen, this is the kind of pub where you can hear most conversations and decipher few.

For just a few pounds, we enjoyed a bowl of stovies, which is a Scottish meal of onions, mashed spuds and minced corned beef, served with oatcakes. Yum!

You can have a look at the menu or find the location at the Halfway House website. 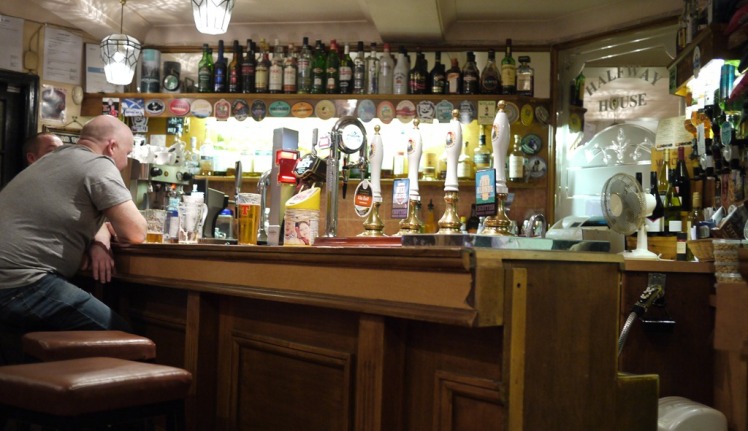 I have to admit that this experience may be a little tricky to replicate. We were walking along  Niddry Street on our first night in Edinburgh and looking for the ‘grungy side of town’ promised by the caravan park lady. Through the eerie green hue cast by the Banshee Labyrinth sign, I spotted a sign saying ‘poetry slam tonight’.

Hesitantly, we crept into the dark cellar to find a group of Edinburgh’s finest female poets battling it out for the International Women’s Day Poetry Slam title. The packed room was rich with red wine and wit, the lights were dim and there was barely enough room to move: in other words, this serendipitous find held the perfect elements for a great night.

After three rounds of quality rhymes and licks, local poet Rachel McCrumb was crowned for her potent portrayal of cultural loss and tension. The language-high crowd then mingled into the labyrinth of rooms, all of which seemed ready for a séance or sacrifice. 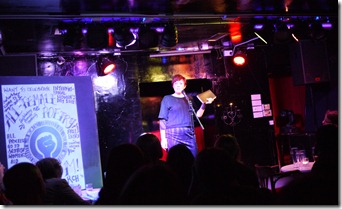 For a similar kind of quirky, creative night that is full of really interesting personalities, check out the Edinburgh events diary on Inky Fingers,  Poets on Fire, The Forest Cafe and, of course, The Banshee Labyrinth.

Walking down the Royal Mile

From the crag-top view of Edinburgh castle down to the inner-city wilderness of Holyrood Park, the Royal Mile is a road that takes you through the city, past many of Edinburgh’s historical sites. Although lined by shops that are blaring bagpipe-beats and selling every kind of tartan souvenir you could imagine, this easy downhill walk offers some stunning views and is a handy way to orientate before delving deeper into the wonders of the city. 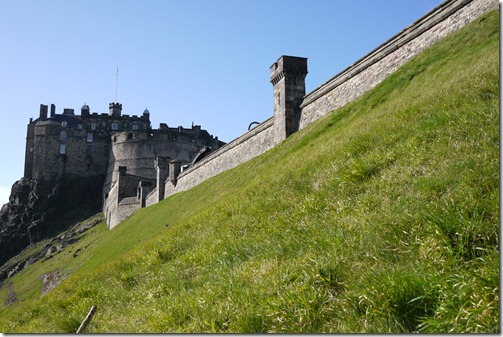 Spending an hour or 3 in Black Medicine Coffee Co. 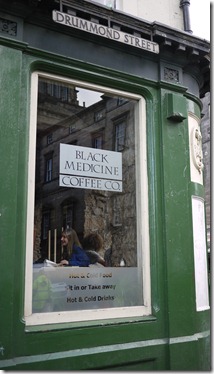 Surrounded by soothing timber furniture, retro lamps, pot plants, an old piano covered in books and inquisitive students, this cafe  feels like the love-child of a library and your lounge room.

With gluten-free yummies, coffee on demand and free wi-fi (possibly stolen from upstairs) Black Medicine made me as happy as a worm in a book.

I do love my cafes and honestly believe that spending quality time reading, writing and people watching with a hot beverage in hand is a very important cultural experience, especially in a city like Edinburgh, where arts, books and music take pride of place in the local social scene.

Taking a Mercat Ghost and Ghouls Tour in the underground vaults

I can still feel the cold air on the back of my neck as the cloaked guide whispered gritty, gruesome and mysterious tales owned by Edinburgh’s streets.

Starting at the mercat cross on the Royal Mile, the evening Mercat Tours Ghost and Ghouls tour weaves through cobbled alleys, past shadowed corners and into the infamous underground vaults built in the 19 arches of Edinburgh’s South Bridge.

I was unsure of what to expect from the tour and was mostly eager to see underground. So, I was a little surprised to find myself caught up in the fun of the true local stories told with humour, theatrical flare, historical fact and in-character safety announcements. Bravo Faith.

As the tour ended in the vault cellar with a glass of red wine, not only did I feel like I’d learnt a lot about the fascinating multi-storey vaults and Edinburgh’s infamous criminals, I also felt like I’d witnessed Edinburgh’s dark side, beyond the street view.

I say ‘attempt’ as this is all I can claim to have done myself. Well known as offering the best view of Edinburg, this amazing rocky mound is walking distance from the city centre. Having heard how good the walk and view was from Arthur’s Seat, Dave and I decided to ‘find’ it on our first afternoon, having done no research and having no directions. 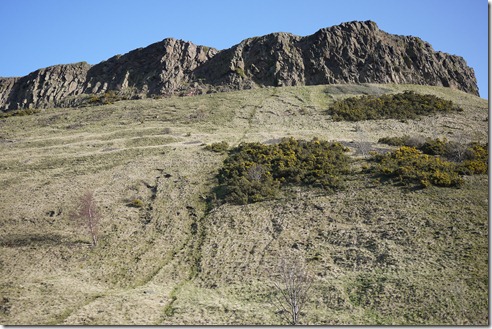 We found it (it’s a big rocky mound in a city after all), after wandering through graffitied inner-city apartment buildings, past community gardens and down curly alleys. Once at the base, we could only see a trail heading straight up the side at a gradient too serious for anyone wearing their only dress. So, we decided we’d return the following day, armed with some more information and appropriate walking clothes.

Of course the next day was cold and wet but we were determined to seek out these famous views. An hour later, we were still  lost, having taken a ‘short cut’ through the underground rail station, been spun around and then followed one of those swivelling sign posts that must have been re-swivelled (or at least that’s what we claim after the fact). Finally, we reorientated and realised we were closer to our starting point than Arthur’s Seat, meaning it was time to cut our losses and do the only thing that we could do in such a situation… have yum cha for lunch.

Our two attempts at reaching the seat led us to some amazing parts of the inner city that we wouldn’t have seen otherwise, which just goes to show that often it really is the journey, not the destination, that astounds. Although I’ve not seen it from the top, I have heard so many wonderful things about Arthur’s Seat that I  thought this little adventure needed to make it in the top eight.

Visiting the National Museum of Scotland

I can’t recall the last time I was so impressed by a museum. While I’ve seen many museums in the past couple of months and the novelty of perusing exhibits is starting to wane, the National Museum of Scotland has renewed my faith in engaging, vibrant and innovative museums.

It makes sense that this museum hits the spot. It has just reopened after a £47million redevelopment. 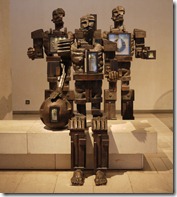 map offers a one hour and three hour version of the exhibition trail, but we would have easily spent four hours without seeing everything on show.  There is also a little bit of everything: from cross-cultural puzzles, dinosaur bones, space telescopes, F1 cars, Scottish cultural exhibits (including a guillotine, yarn spinners and one of the first pump steam engines) and an interactive technology room.

Edinburgh is the perfect city to visit in a campervan. Unlike many other cities we’ve visited, navigating into the city and finding a camping site close to the action was pretty easy. While admittedly we didn’t find any free/wild camping options, we were more than happy to pay for three nights (and three showers!!) at Mortonhall Caravan and Camping Park. The park was clean, good value for money and has super helpful staff that will give you maps, brochures and some local knowledge. But the trump card was the frequent buses that run until 11.30pm to get you between the park driveway and city centre in to 10-15 minutes.

Make sure you have the correct change for the bus. When I was there, it was £1.40 per trip (regardless of where you get on and off). Just pop the coins in the machine, tell the driver you want a single and take the ticket from the printer. If you take three or more trips in a day, it’s worth getting a daily ticket for £3.20 . If you get stuck without change, general practise seemed to be asking other passengers for change. On our first ride we had lovely people give us both the correct change and their daily ticket.

If you miss the last bus home, a taxi will cost about £10. This was the fare we paid when hailing a black cab in George Street (city) in the early AM (after a great night at the Royal Oak) and taking it all the way out to Mortonhall.

Check out The List and The Gig Guide to find out what’s on. While both of these fabulous directories are online, you can buy The List monthly magazine at newsagents (or read it at cool cafes) and The Gig Guide for the week at pubs and venues. Both indicate what’s free and both have shown me the way to a good night.

The best info we found about getting to Arthur’s Seat was here. Turns out, the entry is just at the end of the Royal Mile walk. Go figure.

Thanks to Mercat Tours for the complementary tour tickets. I loved the tour and was glad for the chance to learn about the vaults, the haunted corners and the mob.

Also, a shout out to Wicked Campers UK for the awesome van (Panda) and for making this trip possible. Loving every day of it!