A flicker of red caught my eye in the narrow alley. I followed the flash, chasing sparks of orange and pink around the corner and up towards Kiyomizu-dera Temple.

Ahead, a shuffle of silk whispered the way. Giggling girls appeared, wrapped in kimono of purple, pink and blue. A gleaming rickshaw carried a couple in crimson and white. A cluster of kids wore yellow school hats over their shiny black bobs.

It was warm by spring standards and the streets were abuzz. Early March had been generous, sending sunlight to caress new pink buds on the plum trees and ignite delight in bloom-seeking tourists.

I continued to climb towards the red temple tips that peeked between grey roof tiles. Behind me, the city faded into a haze, giving way to forested hills of heavy green and twiggy brown.

With each step, I met a rising sea of fabric. Floral patterns, both bold and delicate, were woven with glimmering thread. Contrast and complement, tradition and trend, all tightly bound to slender frames. Petals and pins held elaborate hair in place during the frenzied group posing and self-stick wielding. And then I was darting between the clicks and smiles and kitten eyes, part of the photographic fray; my hot trigger finger hunting moments, composition, colour and light. 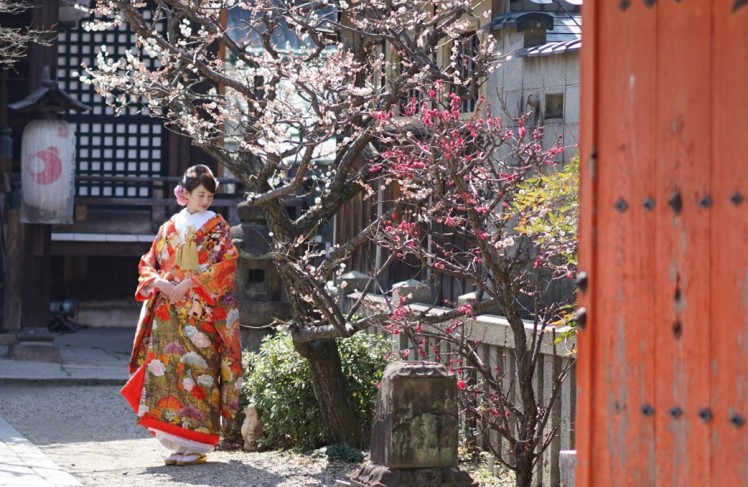 It was hours before I could pull myself from the fine fabrics and picturesque views, nursing a low camera battery and a belly in need of late lunch. As I strolled down the hill towards Gion, past the souvenir shops and sluggish tour groups, I noticed many kimono hire stores touting 3000 Yen per day.

Romance gave way to reason, authenticity to tourism, as I realised the colourful kimonos were mostly on tourists taking pictures to send back home.

All the same, my serendipitous photographic adventure had been a delightful indulgence; a wonderful adornment to the hillside beauty of Kiyomizo-dera.

The Nuts and Bolts

A memorable Kyoto landmark, Kiyomizo-dera perches against the hillside in Southern Higashiyama, welcoming visitors through a striking red and white pagoda at the top of Chawan-zaka. The Buddhist site dates back to 798 with reconstructed buildings from the seventeenth century.

While the entrance and people watching is certainly a highlight, be sure to pay the 300 Yen entrance fee to see the main hall and stand on the broad deck overlooking the surrounding forests and city below.

To get there, walk up along Chawan-zaka from the intersecting Higashioji-dori below, which is well connected by bus or an easy walk from trains (about 15-20 minutes from Kiyomizu Gojo or 25-30 minutes from Gion Shijo, both on the Nara line). If you can brave the crowds, the souvenir shops on Chawan-zaka hold some surprisingly tempting treasures at fairly reasonable ‘tourist hot spot’ prices.

9 thoughts on “Kimono Fever in Kyoto”