After my awe inspiring train trip into the Czech Republic yesterday, I commenced a crash course in finding my way in Prague.

First there was finding which of the three queues for ‘international tickets’ was the right line to actually reserve an international ticket (turns out third time is lucky). Then there was finding a map extensive enough to show Kobylisy, the not-so-close suburb where I booked accommodation. Once I knew my general direction, I had to find the entry to Metro C; this took much longer than you would anticipate when looking for a big, bright red ‘C’. And then, the mother of all search missions, was finding my hotel amongst houses that, for some strange reason, were not actually labelled in chronological or even/odd order (apparently in Prague 23 comes after 37 but before 15).

Today, with a few lessons already under my belt and my friends, Andrew and Nina, as co-navigators, there were only a few lost moments: finding a ticket office at Kobylisy metro station (who would think that would be hard?); finding the Astronomical Clock Tower (a big spire in the middle of the city that chimes); and finding our hotel when we walked out of the Kobylisy metro station on the opposite side of the block. All in all, a day well navigated I think!

In the true nature of travelling, there were a few other delights that we found on our way. There were wonderfully colourful and decorative old buildings side-by-side (my favourite was the lemon-yellow restaurant next to the baby-pink cafe). While walking through Josefov, Prague’s old Jewish quarter, we watched horse-drawn carts clopping over cobbled, narrow streets. In the Old Square,  three wedding parties tooted their way through masses of Prague-crazed tourists. There was the serendipity of a street fashion parade and a restaurant lunch with wine by the carafe. But my absolute favourite find of the day was the clock tower in the the Prague Castle, which admits tourists for only 100kc so they can climb a 287 step spiral stone staircase and pretend not to be thinking about plummeting down the tower to a spine-crunched, pulpy death (oh, and see a really amazing view of the city).

Tonight, we are on a mission to find the famous Prague night life: Jazz cafes, beer halls and wine bars here we come! 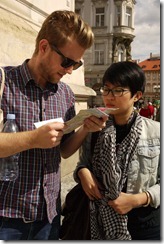 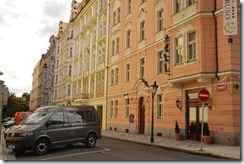 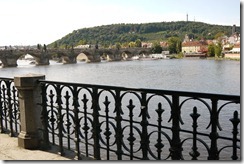 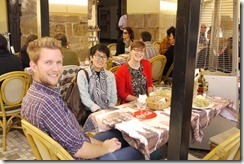 2 thoughts on “Lost in the land of Prague”

Living my best, colourful, salty-skinned, barefoot life today! 📷 @dave_clarkey
Holidaying with all my mates.
The really special adventures always have unexpected beauty, natural wonder, moments of quiet and heartwarming people - thanks for sharing it all @ninawei_ @kamo_13 @dave_clarkey
Starting the year with wild adventures.
2019 was my self-designated ‘year of the Gypsy’. I challenged myself to travel wild corners of the world, to dance and sing at every chance, to let go, to complete a solo 300km walk, and to search for calm and courage every day. // I’m feeling grateful for so much joy, adventure and love, especially when so many others have not been so fortunate. I hope 2020 is brighter for everyone!
Smokey summer sunsets here in Brisbane.
Remembering Spanish afternoons #caminoportugues
What a weekend of heart-warming community spirit. Thanks for being you #4101
Local Sunday full of bright colour.
All about those brilliant moments of simple beauty.
%d bloggers like this: