The challenge was conceived during a little picnic at McCarthy’s Lookout during a recent weekend away in Maleny. It was a sunny afternoon. We had cheese, sausage and pickles. The weekend adventure was coming to end and we were high on fresh air.

So of course, a view of the Glass House Mountains and a tourist sign was enough to inspire us to want to climb these odd-looking volcanic peaks… all of them. 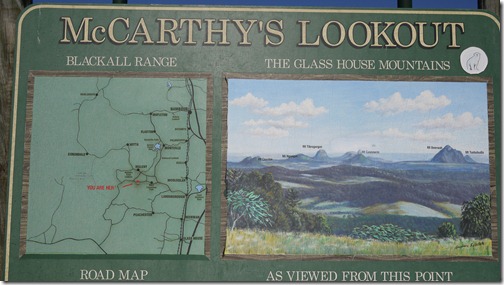 The Challenge: climb all the accessible peaks of the Glass House Mountains range before the end of the year. (Now I must qualify this by saying that I do not consider unmarked tracks or may-fall-to-my-death routes as ‘accessible’, meaning they are not within the scope of this challenge.)

The mountains were formed by the molten core ‘plugs’ of volcanos that were active about 25 million years ago. As time has eroded the land level down, the plugs have become the exposed, awkward peaks apparent today.

The range, which is traditionally owned by the Gubbi Gubbi people, was given it’s current name by old James Cook himself during his voyage up the east coast. Mathew Flinders explored the range in 1799, oddly observing Mount Beerburrum as, “… a pile of stones of all sizes…”.

So weeks after that first spark of mountain-climbing enthusiasm in Maleny, and after a lot of talking about it, Dave and I finally piled into a car with some friends and set off for the first climb in the Glass House Mountain Challenge. 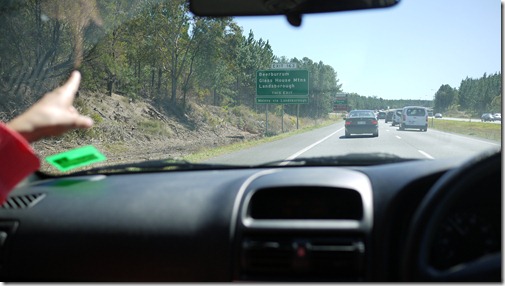 Navigating up the highway and exiting without a map was no worries with the big green tourist signs everywhere. But in and around the mountains was another story, as peaks and pines obscure any idea of what’s around the corner. Eventually though, after lots of ‘just go left here’ and ‘try this road’ (admittedly not the most logical navigating approach), we found our way to the Glass House Mountain Lookout to gain a panoramic view of the challenge.

Mount Beerburrum resembled little more than an ant mount next it’s rocky neighbours and on paper it doesn’t sound that challenging. The climb is only 700 metres up a concrete path that leads to a fire tower. The estimated return trip is about one hour and the walk is rated as Class 4 under the Australian Standards, which basically means it has a defined track, steep bits and begs a ‘moderate’ level of fitness.

Turns out that it had more steep bits than any other bits, most of us were only just moderately fit (judging by the huffing and puffing on the way up) and, contrary to our underestimation of the advised time, it did take almost an hour to get up, have a look around, and back to the carpark.

The summit experience, although harassed by very strong icy winds, was well worth all the huffing and puffing. 360 Degrees views revealed the diversity of the surrounding landscape: pine forests, townships, farmed land, highways and, in the hazy distance, the Lego-like shapes of Brisbane City. 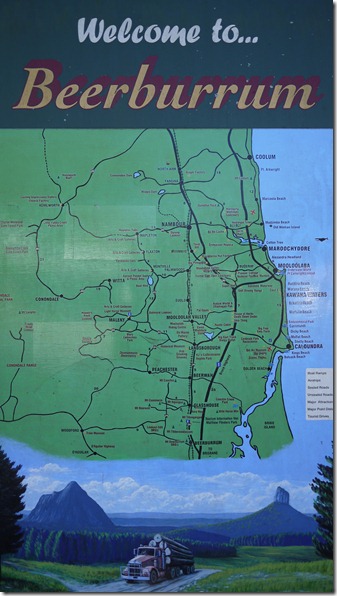 After the walk, we piled back into the car and headed 2 minutes down the road to the little town of Beerburrum to explore.

More surprises. We found a  fantastic antique shed with a very trash / treasure vibe going on, and a post office with an strange Madam Mims affiliation. (We thought it best not to ask).

Finally, we went in search for a picnic spot to eat a very rustic lunch of bread, cheese, jerky, strawberries and carrot sticks, (a recipe designed by a lack of time, kitchen supplies and willingness to spend time shopping in the morning before our adventure)  After more of the above-mentioned navigating style, we picked a picturesque paddock on the side of the road. And this is when the most memorable moment of the day happened.

All day, Dave the Wise (as he will now be known… temporarily at least) had suffered some serious cheek from the group after suggesting the strong winds may cause the hazard of falling ‘logs’. (Granted, it’s perhaps not the best description of falling branches, but a wise caution all the same). So there we were, enjoying the afternoon sun between bursts of near-gale-force winds when, crack! Only metres away lay a young gum tree totally toppled by the winds. Our laughter (and survival) made the day.

So, it is with this story I leave you with the first major lesson of the Glass House Mountain Challenge: beware of falling logs in high winds.

7 thoughts on “The Glass House Mountain Challenge: the first climb”