Flying to Tromsø, Norway for barely two days in search of the Aurora Borealis (a.k.a Northern Lights) was brazenly optimistic at best. Although the phenomena is commonly seen from this small Arctic island, especially between December and March, even the experts admit that a sighting in highly dependant on the conditions, and is by no means guaranteed.

Night 1: We arrived in Tromsø in the late afternoon to find the small city shrouded in night. After a week in Oslo, I had adapted to the late sunrises (9am) and early dusks (4pm), but I was still grappling with the idea of Tromsø’s polar nights. It was so foreign for the sun to remain below the horizon between late November and mid January, giving the days only a dull distant light to contrast the cobalt nights.

Once we checked into the modest but friendly Viking Hotel, we set about finding a tour to take us to these mysterious green lights. It quickly became apparent that most tours were beyond our budget, started between 6pm and 8pm and, in high season, were best booked by noon the same day. No matter though. After acquiring a bit of local knowledge, our group hiked about 45 minutes through residential  Tromsø to Elverhoy Kirke (church). 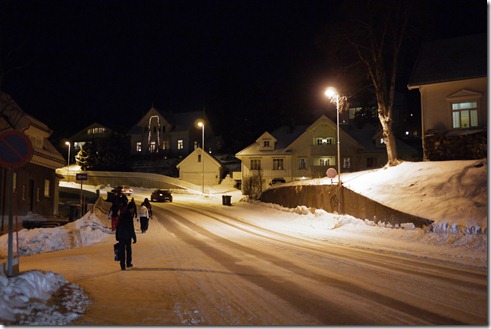 It was there, as we stood beside snow-covered headstones, that we saw the first flickers of green dance across the sky. The lights only lasted about 30 minutes but were so beautifully hypnotic and well worth braving the cold. 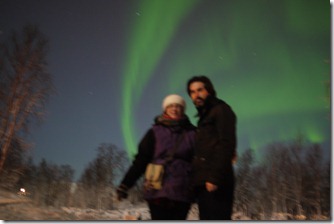 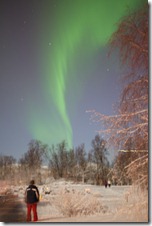 Night 2: With a sighting on our first night, we felt the pressure had been taken off our second night in Tromsø. Unable to justify the expense of a tour (keeping in mind the many months of travel ahead of us), we found a couple of fellow budget travellers and hired a car from the Avis depot in the middle of Tromsø.

Kitted up with a car, GPS, fire lighters and wood, a thermos and snacks, we sourced some expert advise (‘head for Finland’) from a tour guide friend of the helpful man at reception, and started the hunt. Driving on the right side of the road through ice and snow was half the adventure (thanks for driving Paulie), as was navigating our way… towards Finland.

After almost an hour of driving past small fishing towns, frozen water, snowy fields and mountains that rose out of the earth with little warning, we ended up in a place called Oldervick, on the eastern side of the Troms island. Unfortunately, we had kinda missed a small detail when choosing our destination – there are no roads around or off the island after you get to Oldervick; it was one road in and out of small fjord-side town.

With the clouds quickly closing in and no flickers of green overhead, we decided our best option was to just enjoy the adventure and temporarily abandon the hunt. Within minutes we had a raging bonfire on the side of the road and cups of hot chocolate in hand. 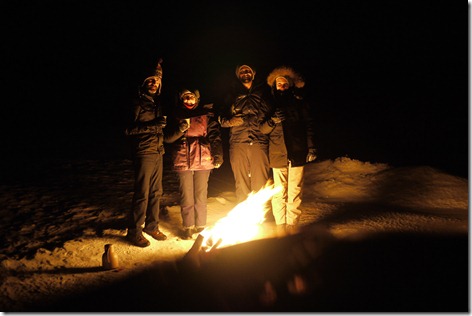 Standing there in steadily falling snow, surrounded by mountains and on the look out for moose (as cautioned by the road signs), it felt like we really were at the top of world and very long way from anything like home. 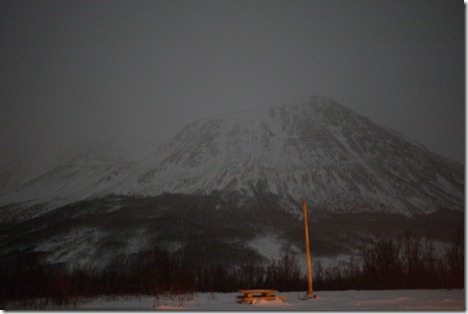 Our little fire-side outing was abruptly ended by a mini blizzard, which lasted just long enough to get us all in the car and driving (very very slowly) towards Tromsø with a fear of being snowed in. 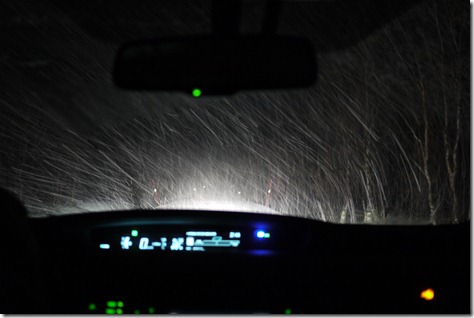 By the time we retired that night, I had a that deeply satisfied feeling that comes from an adventure in a foreign land. We had hunted and failed, but had seen a lot more than just the northern lights during our Tromsø visit.

How to hunt the Northern Lights in Tromsø

Check the conditions to get an idea of the expected light activity. We had a forecast of ‘partly cloudy’ and a activity rating of 1 (not so good) on the first night, but fortunately still saw the lights.

A good online sources for this is the Aurora Forecast from the Uni of Alaska Fairbanks’ Geophysical Institute , which comes with a lovely image of the aurora’s expected path.

Be prepared to wait. The lights most commonly appear during 6pm and 2am and may last for a couple of minutes or for most of the evening. We were lucky to see the lights as soon as we arrived at the church on the first night (about 9pm) but spoke to other travellers who had missed them at other times from the same spot. On our second night, we decided to give up and go to bed around midnight due to the cloudy, snowy conditions and missed the brief display that reportedly happened about 1am.

Plan for the cold. I’m talking snow boots or heavily insulated boots, thermals, down jackets, waterproof materials, blankets and a thermos of hot liquid. Tromsø was covered in snow and had icy winds when we were there. In January, the average temperature is about -4°C and the coldest recorded temperature is –18.4°C.

Be camera-ready. It is a bit of a challenge to capture the green waves as they dance across the sky. We managed to take the photos above with only a 3.5 second hand-held exposure, but we have been told on good authority that 25 second exposures from a tripod (or a similarly steady surface) are best for capturing the lights. Despite both Dave and I having an interest in photography, we were caught unprepared for the brief encounter and found ourselves madly looking for the right settings and surfaces from which to photograph the moment. Of course, there are plenty of online resources from photography enthusiasts who have been there and done that.

Do your research. Whether you prefer to take a tour or DIY your Northern Lights hunt, I recommend researching options before you get there (unlike us) to make sure you get value for money and have time to enjoy the town during the very limited ‘daylight’.

There are plenty of tour groups in town offering a Northern Lights experience from between 700 NOK (for the basic bus, cuppa and some warm clothes) and 2000 NOK (if you want lights with an activity, like dog sledding, cruising, skiing, trekking or visiting a lavvu tent or sauna).

Or, like us, you can take the slightly more budget/ intrepid option of hiring a car and navigating your way to dark skies out of town. We booked a Avis car online with a promotional code (just Google to get one) for about 800 NOK for 24 hours, picking it up in town and dropping it off at the airport. (Europecar, Cominor, Hertz and Budget are also in Tromsø.) It’s also worth noting that parking in Tromsø is prepaid, so just ask if you can park at the depot and find out when/where/ if there are free parking spaces near your hotel.

The Tromsø tourist information centre near the Tromsø cathedral in town is a great source of info, with lots of maps and brochures. They can also book for you (but only for with some companies), or you can call a tour group from the red payphone just around the corner.

It’s also worth checking out the VisitTromsø website for local info and tips about how to hunt the Northern Lights.

20 thoughts on “Hunting the Northern Lights in Tromsø, Norway”