Ever since Mr Jones, my ear-pierced, leather-jacketed Ancient History teacher, explained the marvel of Hadrian’s Wall, I have wanted to see it with my own eyes. So when we drove the length of it in our Wicked campervan the other day, I was quite an excited little traveller.

Stretching 73 miles across the northern peninsula of England, Hadrian’s Wall runs past sheep paddocks, rock quarries, ancient Roman forts and modern townships. It overlooks the stoic pines of the Northumberland National Park and in parts, assumes the humble role of pathway for the many visitors who walk its length.

Contrary to the common story that the wall was built to keep out the Scots (it was not Game of Thrones and the Scots were not the wildlings), historians say the wall was ordered by Roman Emperor Hadrian to establish border control between England and Scotland. In other words, this big, long wall that took three legions (that’s more than 9000 Roman soldiers) about six years to build was there to collect taxes and monitor population flow.

The 2000 year old structure has understandably lost some of its ancient grandeur. It now appears as a thicker, older version of the much newer stone walls that lace the English countryside. Despite its smaller scale, I found the wall to be a beautiful reminder of how history can fade into the earth but still say so much about how we live and think today.

Having risen early with the frost-blanketed dawn, after wild camping outside Brampton, we were hunting the wall well before most people were awake… It’s quite possible that the icy night had chilled our brains, leading us to a couple of misadventures throughout the day.

I was a little surprised to realise that there are parts of the wall now missing, despite being widely represented on maps, and that it takes quite a few twists and turns through small towns and farms to find the thing.

After a couple of U-turns, and an encounter with a goat, our first stop was the former Walltown Quarry / Whinn Sill. There we found the Hadrian’s Wall, interrupted by deep gouges in the bedrock and landscaped quarry ponds. Although stunningly beautiful, a great point to see the wall and quite interesting, we didn’t linger too long as the grass was still crunchy with frost and we thought it too cold to walk.

Then it was onto Cawfields, only a short drive west, where the sunshine appeared across the sleepy paddocks, illuminating the wall into the distance. This is a great spot to park the car for the day and do a walk through the paddocks, along the wall.

After a brief look at Cawfields, we drove to the nearby Housesteads Fort to check out the well-preserved remains of a Roman fort along the wall. The site didn’t open until 10am, or so the sign said, so we happily parked Panda in the empty carpark and made eggs and bacon for breakfast.

Almost two hours later, as 10am ticked over, we prepared to leave Panda van to explore the Roman ruins. But the car wouldn’t lock using the key. And the engine wouldn’t start. Suddenly the penny dropped… that strange whining noise we’d dismissed earlier as a nearby engine was actually the sound of Panda’s headlights sucking the power from the battery. Fail team Panda. 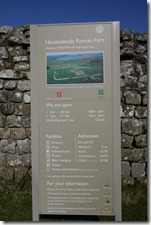 Deciding that we could deal with the issue later (I love the denial approach), we manually locked the car and ventured towards the cheery National Trust attendant at the entrance. It was there that we learned we could‘ve entered the site at any time; admission was free and the gate wide open due to construction  being done on the adjoining museum. Fail and win.

So, with our free entry, we hiked half a mile through more paddocks, past more sheep and into the grey stone ruins. The ancient fort was like a forgotten world, sitting on a deserted sunny hill, waiting for us to explore without another soul in sight. Another win.

More than an hour later, after mentally recreating the fort, imaging what it would’ve been like to stand inside a complete bathroom, recover in the hospital and plot battles in the office, we decided it was time to deal with Panda’s flat battery.

Thankfully, Wicked had kitted us out with some very serious looking jumper cables (among other useful safety do-dads) and the cheery man from the National Trust was more than eager to give us a jump start. Big win. 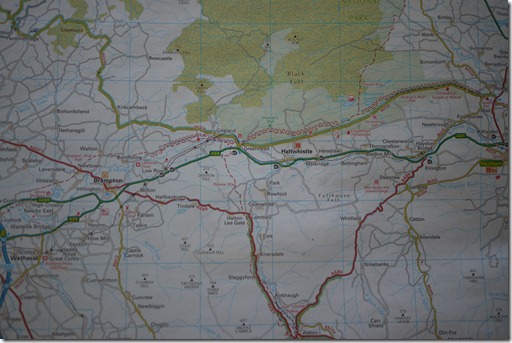 By the time we’d driven and explored the length of the wall, right down to near Newcastle, it was mid afternoon and I was feeling pretty chuffed with the day. Not only had I seen Hadrian’s Wall, and a wonderful Roman fort that I’d previously known nothing about, but now we were driving into Scotland!

A shout out to Wicked Campers UK for the awesome van (Panda) and for making this trip possible. Loving every day of it!

11 thoughts on “A day along Hadrian’s Wall, England”