The salt haze has stiffened and the evening light has paled across the wild Atlantic view. I am warm and comfortable inside the campervan but the whistle of the coast wind brings chill bumps to my skin.

I’m not sure how long I’ve been here. It could be an hour, it could be four. But I’m content to stay until the ocean succumbs to the Irish night and my eyes cannot see the pen telling stories to cards, which are destined to follow my footprints home.

I find that travel takes on a new mood with every new destination. Sometimes it will be jovial in a bustling market square, or inquisitive in hallowed college halls. Some places make travel thoughtful with views across mountains and lakes, while others ignite passion for culture and history.

The west coast of Ireland inspired the creative traveller in me. I wanted to write poems about the Achill Island Atlantic and photograph the light as it graced the Connemara National Park. In Galway, I wanted to sing, and dance; be one with the fiddle. And as I stood on the Cliffs of Moher with hungry eyes, I felt that only a painter could capture such an epic view.

In the end, I did none of these things. Instead, I just wandered, breathed it all in and jotted mental notes in the hope that some of it could be carried across to you.

My first notion of Westport was conceived with a drunk in Belfast. With Guinness-breath and St Patrick’s Day cheer, he sidled up to me in a busy bar and told me about his country. Between the slurs and accent-hidden words, I clearly heard, “You have to go to Westport, everyone has a fiddle down their pants”. And so we went to Westport.

Although our stay was brief, Westport offered us a few gems. The first was the cyber-pub; the place where food, beer, the interweb, intoxicated locals and blaring televisions (yes plural) meet. While the food was okay and the pints were cold, the real beauty of this place was in its ability to be a little bit ridiculous and a little bit comforting all at once – kinda like sitting in your lounge room with your drunken uncle and makeover-TV-obsessed aunt, while trying to pump out a blog post.

Gem number two was the Creel Cafe, a cosy little place with floral tablecloths, free wi-fi and a lovely, well-travelled barista. Needing power for our laptops, coffee for our morning-brains and a place to just sit for a while, the Creel Cafe was a welcoming host. It was there that we heard an elderly man speak in verse (in a melodic Irish accent), and that Caitriona, the lovely barista, gave us a stack of quality local travel advice that led us to Achill Island and down the scenic route to Galway in the days that followed.

I enjoyed Westport for its hive-like feel. Although our stay was not long enough to encounter any fiddles down any pants… or elsewhere, we did encounter a tourist-ready, warm and friendly community.

The short drive from Westport to Achill Island took us through Newport, a very tidy village along the coast. We stopped in for a tank of fuel and met another delightful local who suggested we turn left at the church for a scenic drive to the island.

So, following our habit of travelling on local advice, we turned left at the church and continued 20 minutes along a narrow, bending road, through rock-litter fields, past stubborn road-dwelling sheep and beside a glorious sun-kissed ocean.

At first, Achill Island reminded me a little of the Scottish Highlands, with scraggy cocoa moors and rocky hills. But then we hit the ocean and found long sandy beachfronts, boulder-covered coastlines and laurel green grasses. 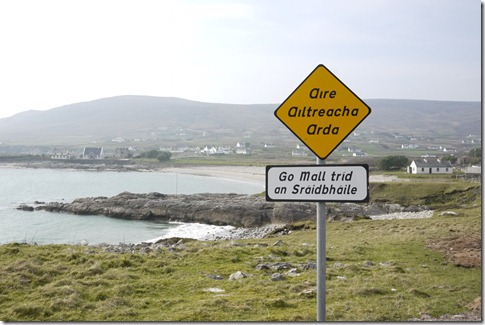 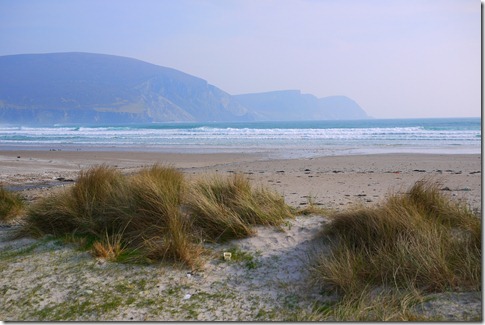 We stopped for lunch in a beach-side carpark and stayed for hours, watching the Atlantic crash and churn against the patient shore.

Then, as the sun finally disappeared below the horizon, we drove back to Newport to wild camp and stopped in at the pub (near the petrol station) to sit by the fire, drink a pint and listen to cackling nannas playing their weekly card match.

Through the heart of Mayo County, past Ireland’s sacred (Mt) Croagh Patrick and through the enchanting Doolough Valley and Connemara National Park, the R355 road from Westport via Louisburgh and Clifden was one of the best one-day scenic routes of our UK and Ireland adventure. A  slower but scenic alternative to the Galway-bound M-road, the drive rewarded us with views of yellow wildflowers, and clusters of fishermen hoping to snag some salmon.

Bubbling with creative energy, the small city of Galway is a delight to explore. With performers seemingly on every cobblestone street, rows of book stores and boutiques, chic little cafes and fresh produce markets on a Saturday morning, I found Galway to be a lively, traditional-come-bohemian Irish city. 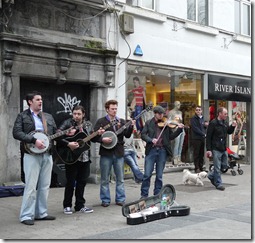 I was excited by Galway’s reputation for live music and a good night out, so Dave and I joined the Friday night buzz in search of a band or two. Unlike many other cities we’ve travelled in the past three months, finding music in Galway was easy… we just followed our ears from street to street and eventually decided on Tis Coili, where traditional Irish music sent warm cheer through the thick crowd. I tried the traditional hot whiskey (served with lemon, cloves and sugar) and within minutes was in foot-tapping bliss. 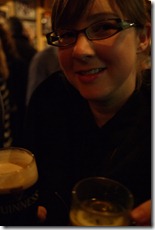 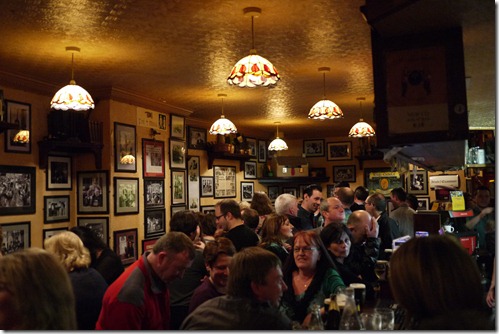 Saturday morning brought more cheer as we explored the festive streets and bought bags of delicious produce for our drive to the Cliffs of Moher. Riding on the salty breeze was the squawk of gulls, the scent of garlic olives and fresh oysters, and melody of a fiddle somewhere in the crowd. The wholesome, friendly feel of the place had me wishing I could stay another day or two. 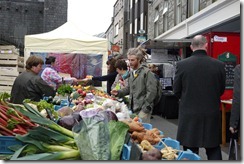 The Cliffs of Moher

Standing up to 200 metres above the grey Atlantic Ocean, the Cliffs of Moher rank pretty highly in Ireland’s long list of natural attractions. Formed more than 320 million years ago and stretching about eight miles along the coast, this site not only offers epic views, but is home to Ireland’s largest colony of seabirds.

It took us a couple of hours to meander through County Clare, along the coastal road from Galway to the cliffs. Once there, we took an hour to (carefully) walk along the top and enjoyed a feast of Galway produce.

Tips for travelling the west coast of Ireland:

Sadly, places allowing overnight parking / camping are hard to find on Achill Island. We drove at least half of the island coast looking for a place to sleep but found that, despite the wide, open spaces, ‘No Camping’ signs has been persistently placed around the island.

Wild camping or paid camping options are very limited in Galway in winter. We found that all the campsites in the area were closed until late March / early February and that city parking was all paid or prohibited overnight parking. So we stayed one night in Kinlay Hostel, right in the heart of the city, for only slightly more than the cost of a campsite. Panda van spent the night in the paid (but discounted to hostel rates) parking down the road. (Not the shopping centre one – it’s too expensive and has limited access at night).

There is free overnight parking in Westport harbour or paid overnight parking near the bus station in town. We parked in the harbour spaces, which are well lit and seem very safe, but there are no toilet facilities. The town carpark has a paid toilet…one of those automated cubicles that takes coins (in denominations that you never seem to have when you’re busting).

The Cliffs of Moher are a couple of hours south of Galway along the scenic road. They are best accessed by car, but tours also run from Galway. If you drive yourself (as we did in our Wicked campervan) you can either pay the 6 euro per person for parking and ‘admission’ or (unlike us and like many of the tourists we saw after we’d paid), park along the road and try your luck wandering up to the cliffs without a ticket. You can apparently also access the site after the visitor centre has closed. Read the site page here for more info.

Useful online resources for these parts include:

Stayed tuned for the next leg of my Wicked adventure, which takes me to Dublin for springtime delights and a Sunday session.

A big cheers to Wicked Campers UKfor the awesome van (Panda) and for making this trip possible.